My maternal grandmother would always begin the story with President Andrew Jackson’s Indian Removal Act in 1831. She would speak of how the American government forcibly removed the Choctaw people from their land, marched them away from their ancestral home with only what they could carry on their backs, through harsh winter conditions and a scarcity of resources. That march, known as the “Trail of Tears,” led to thousands of deaths and a deep historical trauma that still affects the Choctaw Nation of Oklahoma today (Greenwood). My paternal grandmother would speak of the arrival of the “Great Famine” in Ireland a few decades later. She would tell me that the Irish people were starving from the extreme lack of food and suffering from famine-related diseases. The trauma they endured from this experience was lasting, and the effects are still evident, particularly in the efforts to revitalize the Irish language after its decline in famine times (Hoffman).

These stories would converge at the year of 1847, when my Choctaw ancestors learned of the struggles of my Irish ones. Still recovering from their own trauma, the Choctaws were not in a position of wealth, but upon hearing the plight of the Irish, they felt their own hearts pang with loss, their stomachs twist in hunger. They gathered a collection of $170 (the equivalent of about $5,000 today) and gifted it to Ireland in a generous act of compassion and hope (Teows). It was through this story that I learned of solidarity, of generosity, of human kindness. It taught me the importance of resilience and how my ancestry not only consists of people who are determined to survive but people who are resolved to help others survive as well.

These two nations haven’t forgotten their connection either. In 2018, during a visit to the Choctaw Nation of Oklahoma, Taoiseach Leo Varadkar announced the Choctaw-Ireland Scholarship program, which would allow for a Choctaw scholar to study for a master’s degree at University College Cork, in Cork, Ireland (Lynch). In 2019, the application opened, and it was with great honor that I became the first recipient. I traveled to Ireland in August of 2019, ready to begin my master’s degree in creative writing and eager to be a part of deepening the ties between the Choctaw and the Irish.

Upon moving to Cork, I had expected to feel closer to my Irish ancestors, but I didn’t realize how much closer I would feel to my Choctaw ones as well. The first thing I did once I got there was visit the Kindred Spirits monument in Midleton, a sculpture comprised of nine, twenty-feet tall feathers, rounded into the shape of an empty bowl. The sculptor, a Cork-based Irish artist named Alex Pentek, spent a year creating it in order to commemorate the Choctaw-Ireland connection, and it was erected in 2015. I brought along my Choctaw flag and had my mother snap a few photos, but most of my first visit was spent standing in the middle of the sculpture, feeling the overwhelming mixture of love and pain and generosity from all the events that led to my being there.

My second visit to the sculpture was to meet Choctaw Fulbright scholar, Chayla Rowley, who was studying in Dublin and had reached out to me through a mutual acquaintance at the Choctaw Nation. Having grown up in California, away from the Choctaw community in Oklahoma, I had only met a few Choctaws who were not members of my own family. Getting to be in Ireland, at the Kindred Spirits monument, and meeting this other Choctaw for the first time was an incredible experience. We spent a while there, getting to know each other in the shadow of the nine feathers, feeling deeply tied to the sculpture, the land, and our ancestors. 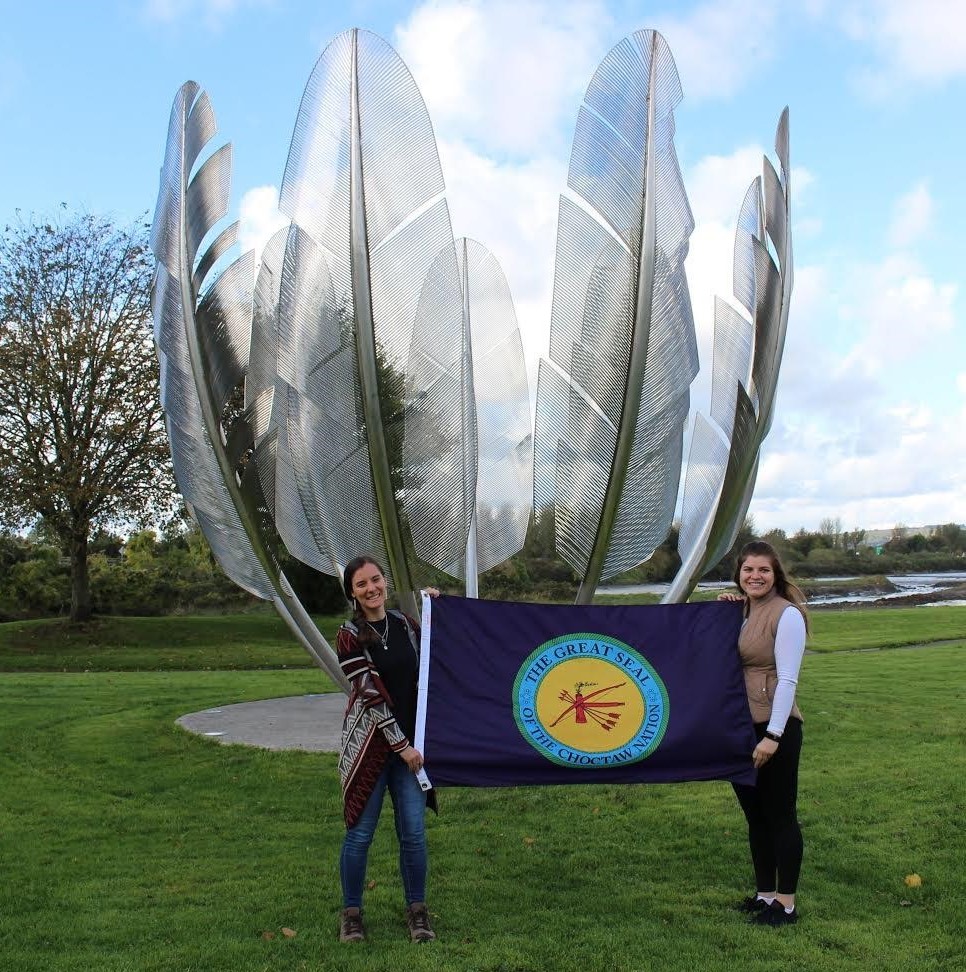 As my year abroad continued, I become a proud advocate of the Choctaw Nation and the link between the two sides of my heritage. I wrote an article for the Cork newspaper The Echo about the Choctaw-Ireland connection and the scholarship that brought me there (Militante). That article caught a fair amount of attention and led to me being interviewed by “Dermot & Dave” on national radio station, Today FM. It also led to the meeting of another Choctaw scholar, Tc Crawford, who was also studying for her master’s at UCC.

We met for tea and spoke about the incredible chance of meeting each other, noting how the connection between the Choctaw and the Irish seemed to be intertwining in new and exciting ways. As part of her master’s program, Tc was producing an event called “Ripple in Time,” part of Cork’s Half Moon Festival, and she asked me to participate. Although the festival was originally supposed to take place in April 2020 as an in-person event in Cork, the COVID-19 pandemic forced Tc and me back to the United States and forced the festival to an online space. The digital festival took place at the end of June 2020, where each participant contributed something that fostered the Choctaw-Ireland link. During the festival, I had the honor of reading an original short story about a young Choctaw student struggling with her identity. A Choctaw musician based in California, Grant Crawford, played the Native American flute and collaborated with Cork-based Irish traditional musician, Macdara Ó Faoláin, from across the ocean. Alex Pentek even contributed a presentation about the creation of the Kindred Spirits monument. Irish historian Turtle Bunbury hosted a post-show discussion between all of the contributors, and I had the pleasure of sharing with Alex the impact of his sculpture on my own life. In that moment, it felt like everything had come full circle for me.

The global pandemic cut my year in Ireland short as UCC closed its campus in March and I had to return to California to finish out the rest of my degree online. Once back home, I learned that COVID-19 was disproportionately affecting Native American communities, especially the Navajo and Hopi tribes (Morales). The generous citizens of Ireland learned about this as well and began donating to these tribes in large and unexpected quantities (Locke). This act of “paying it forward” by the Irish to other Indigenous peoples in America was beautiful to witness and shows that the formation of new connections between different cultures is always possible.

My time in Ireland will stay with me for the rest of my life. While there, I made lasting friendships with both Cork citizens and fellow Choctaws, I was taught invaluable lessons by wonderful instructors, and I became even more connected to my ancestors than ever before. As the next Choctaw-Ireland Scholarship recipient prepares for her departure, I hope she remembers to pack water-proof clothing. I hope she steps off the plane and heads straight for the Kindred Spirits sculpture. I hope she meets fellow Choctaws and makes incredible Irish friends. I hope she continues to advocate for our tribe, for our ancestors, and for the unforgettable bond of love and solidarity between these two Nations.